Results and experiences from the test drives in 2017 in Koppl

The test drives in Koppl in 2017 were one of the first attempts worldwide with a self-driving shuttle on public roads in mixed traffic in a rural environment. At the center of the experiment was the real-world testing of a self-driving shuttle to bridge the first / last mile in public transport. From April to November 2017 240 test drives with 874 passengers were conducted and 341 kilometers were covered. The accompanying passenger survey with 294 participants showed a high level of acceptance of the new technology and a good sense of security on board the Digibus®. 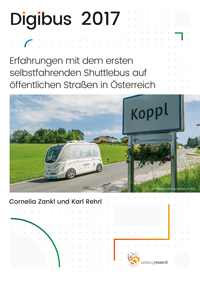 The results of the test drives show that the technology is ready for testing however, it is still a long way to go to driverless operations, especially in mixed traffic scenarios. In summary, it can be stated that the tested self-driving shuttle did not meet the expectations of highly or fully automated vehicles. A key finding of the tests is that practical experience on public roads in mixed traffic situations are indispensable to proof the actual level of development under realistic conditions. The real-world testing revealed big differences between the manufacturer’s announcements and the actual state of development. The tested vehicle can currently only be considered as a kind of prototype in the research and development phase. Despite the enormous technical progress of recent years, the current real-world testing showed that the tested self-driving shuttle can be classified as a maximum of automation level 3 (“conditional automation”) (according to SAE J3016).

Final Report (in English): Digibus 2017: Experiences with the first self-driving shuttlebus on open roads in Austria

Back to home page